A get well card for Pope Francis from Giulia, a girl treated in Bambino Gesu Hospital./Credit: Vatican Media

During his hospitalization, Pope Francis has exchanged affectionate messages with the young patients in the nearby pediatric oncology and children’s neurosurgery wards, according to the Vatican.

The pope, who has been recovering from intestinal surgery in Gemelli University Hospital this week, also received handwritten get well cards from children staying in other hospitals in Rome.

“Dear Pope Francis, feel my prayer like I felt yours when I was sick,” wrote a girl named Giulia, who has undergone treatment at the Vatican-owned Bambino Gesù Pediatric Hospital.

Below the message, Giulia drew a picture of her holding Pope Francis’ hand while he is in a hospital bed.

Another card from children in the Gemelli polyclinic had a colored pencil drawing of the pope and inside the message said: “Dear Pope Francis, we know that you are not very well and that you are now in the same hospital as us. Even if we cannot see each other, we send you a strong hug and we wish you to get well soon.” “At this particular moment, [Pope Francis] looks toward all those who suffer, expressing his closeness to the sick, especially those most in need of care,” Vatican spokesman Matteo Bruni said in one of the Holy See’s daily health bulletins.

In the latest health update released July 10, the Vatican said that the pope’s clinical progress is as “expected” and that “his blood tests are satisfactory.”

“He is gradually resuming work and continues to stroll in the corridor of the apartment,” Bruni said.

“In the afternoon, he celebrated Holy Mass in the private chapel and in the evening he dined with those who have been assisting him during these days.”

The Vatican has announced that Pope Francis will lead the noon Angelus prayer from his hospital room on Sunday. Pope Francis is staying on the 10th floor of the Gemelli polyclinic in a wing reserved for papal medical emergencies.

The Catholic hospital and medical school has treated other popes and Catholic figures, including John Paul II after he was shot in an assassination attempt and Mother Teresa, who was treated in the clinic’s cardiology department. 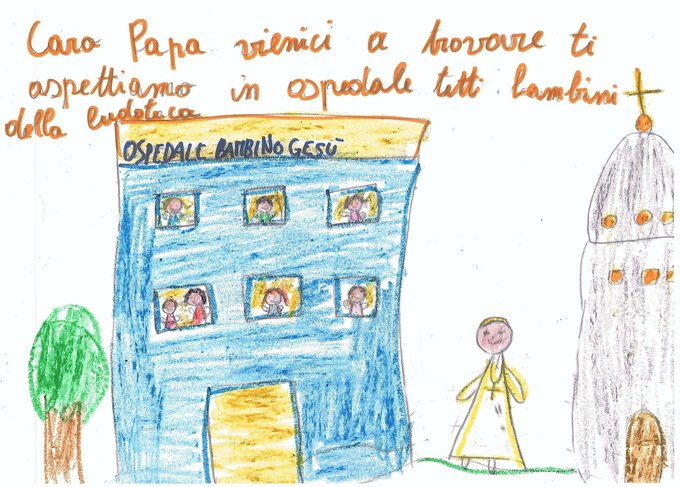 “The Holy Father, experiencing first-hand the human dedication of the medical and health personnel assisting him, has addressed a special thought to all those who with care and compassion choose the face of suffering, engaging in a personal relationship with the sick, especially the most fragile and vulnerable,” the Vatican spokesman said.